Welcome to the third part of my OSRS reversing series, today we’re finding all the things, kinda.

We’ll be looking at actually iterating what I’ve called the render list, which seems to be the best approach for finding most things with the notable exception of players, NPCs, and most likely projectiles. They’re all present in the list of course, but at least externally (i.e. reading process memory rather than injecting code and hooking stuff) the data is very inconsistent due to the objects being cleared and added again every frame. Ground items and other objects on the other hand are only added once and are quite static until removal.

This means that externally this is a great source for world objects that aren’t updated on every frame and internally it might be your one stop shop for literally everything you need if you hook the right part of the game.

I recommend looking at the first entry in this series to see how you can use ReClass to inspect data and how to navigate Ghidra a bit if it’s unfamiliar.

Contents of this blogpost are based on the 26.2.2021 build of osclient.exe

Identifying the common function for adding stuff to the render list

Suppose we have our render_player and render_npcs functions from part 1, how do we find and verify which function inside those functions is responsible for adding stuff to the render list? Because if we’re lucky it may be used by things other than players or npcs.

We can use our good friends x64dbg and Ghidras function call tree here to help. 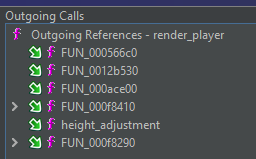 We can go through each outgoing function and patch out the function calls if they seem to be doing something more than just reading data. FUN_000566c0, FUN_0012b530 and FUN_000ace00 seem to be doing nothing more than reading object data in various ways and returning it, so I doubt those are responsible for any rendering. We also know which function is height_adjustment from the part 2 post so it’s not that. That leaves us with the candidates FUN_000f8410 and FUN_000f8290.

Let’s attach x64dbg to osclient.exe, then let’s hit ctrl+g to navigate to osclient:base+f8410 and we’ll arrive at the beginning of FUN_000f8410.

And nothing happens. That’s disappointing, but let’s try the same steps again but for FUN_000f8290. 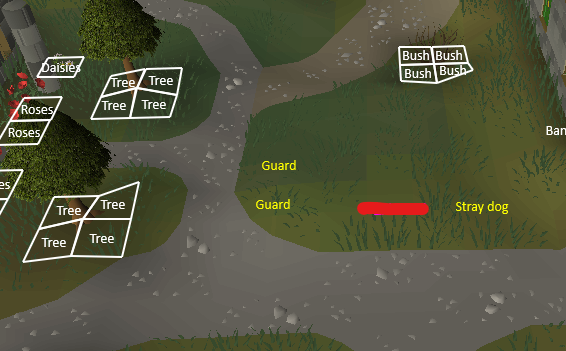 NPCs and players have disappeared after the second patch

Players and npcs have disappeared, but game objects are still there after switching worlds. Switching worlds is recommended between patching stuff like this because it will cause a full reload of the game world.

Press CTRL+P to open the Patches window in x64dbg, and under the Patches list hit restore selected to remove the patches we made to restore normal game operation.

The only function called

After patching the first instruction to be ret using the same steps as before and switching worlds, a lot was missing. 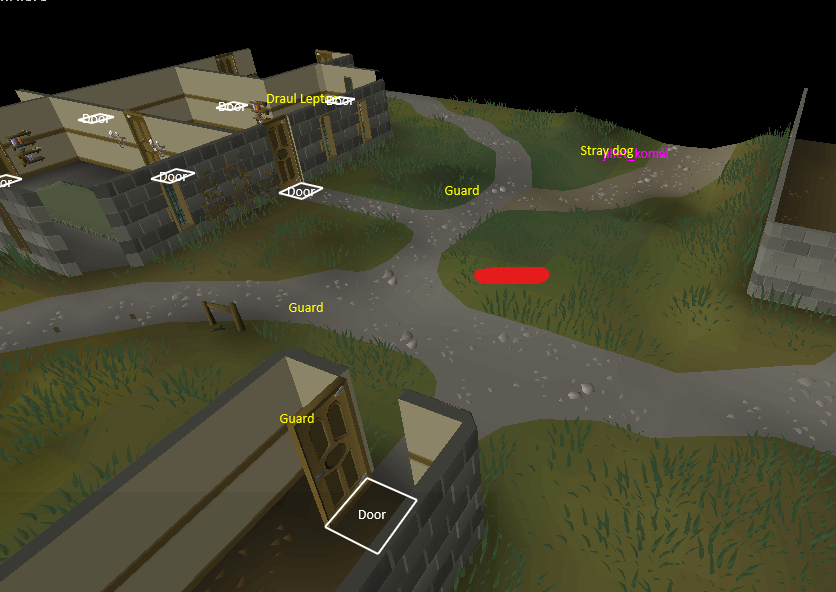 Only walls, ground decoration and doors are left

Most interactable objects are gone, doors, ground decorations and walls are still there. But this is an important function, let’s rename FUN_000f84f0 to renderlist_add_object.

You may want to restore the patches now so you will actually find data in the next section.

NOTE: In the following parts I’m going to be skipping some less important stuff thats not strictly required for iterating the render list due to length reasons. You can use x64dbg or ReClass to find out more about the parameters or variables, refer to part 2 for a quick look in to how to log parameters with x64dbg.

Let’s look at the beginning of the renderlist_add_object function to see whats happening there.

Let’s go back a few function calls to figure out what some of the parameters are for now. In renderlist_add_character we’re only really working with parameters from the earlier call, but in render_player we see the parameters being the following.

At a quick glance for renderlist_add_character some of the parameters are the following: param_1 is the pointer from DAT_018860a0, param_2 is the floor_num, and if you have read part 1 you may realize that param_3 is the x position and param_4 is the y position, for now I don’t know what the others are but I just want a rough idea.

param_1 and param_2 are once again the pointer and floor_num, based on the code the variables used for param_3 and param_4 are pos_x and _y adjusted in various ways. But most importantly the >> 7 on the line above the function call shows that they are in the form of tile coordinates. As tile coordinates are coordinate >> 7 or alternatively coordinate / 128 . Let’s rename these parameters in renderlist_add_object and look at the code again.

The code may look like C-style variable cast hell, but what jumps out are the parts like this: param_1 + 0xXXXX so let’s look at ReClass now to see what’s in those locations.

It’s time for some ReClass work, set the type the pointer is pointing at to be an Array by clicking the blue arrows next to the variable name, then set the Array to be an array of Class instance by clicking the blue arrows, add 8 bytes to the new class and convert the nodes to be pointers. Then set the array size to [10816] by changing the number in the square brackets. You should hopefully get something like this:

Object array in the renderlist

A common thing in the OSRS engine is that the second pointer is usually the one where the actual object starts. But another question is if this array is supposedly accessed by tile_array[x_tile * 104 + y_tile], how do we know which tiles to check in the array?

Here are some possibilities:

Here’s some quick copypasta for that:

That should give us something a little like this: 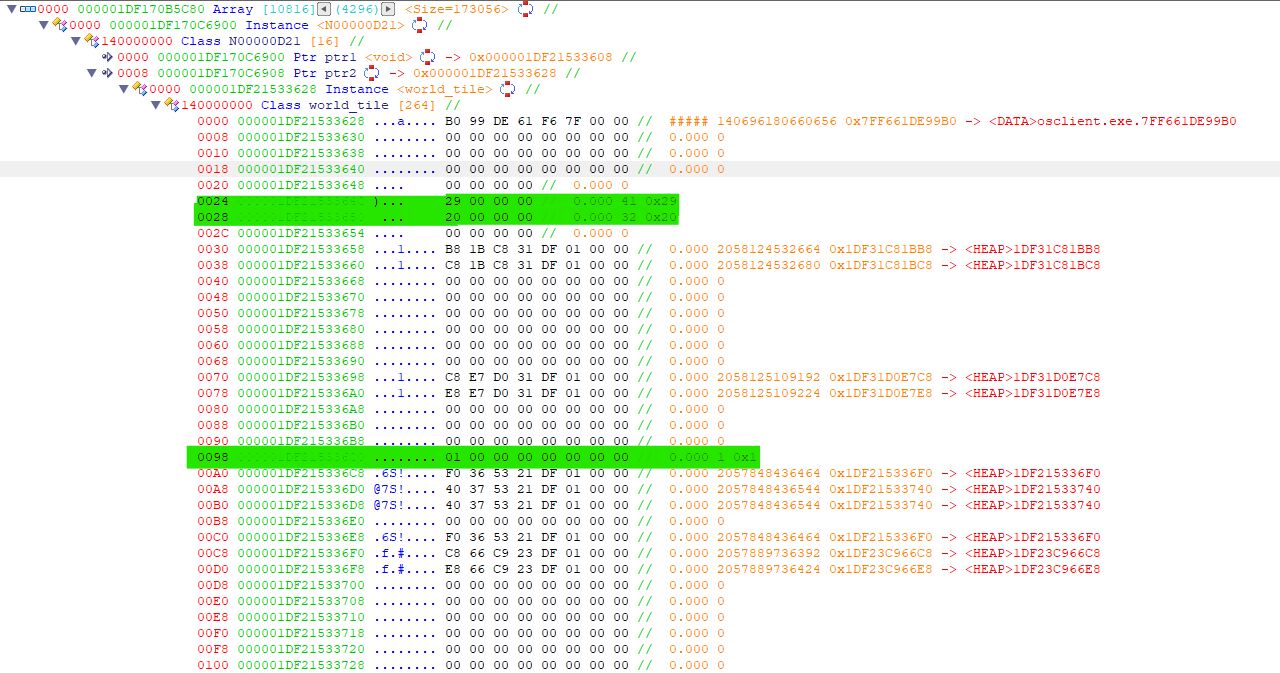 I highlighted a few parts that jumped out at me first. +0x24 and +0x28 contain the tile coordinates (addition: 0x2c is floor), and + 0x98 was checked in the function we were looking at earlier and its 1 in this case. I changed the array index a bit and noticed that on tiles with no objects on them + 0x98 is 0 and a pair of pointers disappears from +0xC8.

If we remember the second pointer rule, we need to investigate the pointer at +0xD0. I spent a while looking at different tiles, objects and stuff and managed to deduce this.

pos_z, pos_x and pos_y are the starting coordinate for the object. Say we have a 2x2 Tree object, every one of the tiles that the tree is on points to the same starting point. The Z is height_adjusted so if you want to world_to_screen it you can make a version that skips height_adjustment, or you can just recalculate the z. object_ptr points to the original object I believe. So an npc, player, other object metadata etc.

For the object_id although it seems to be a bit off, it’s the same thing I did with the mouseover code above. The actual object id for the Tree object I’m looking at is 1276 which is 4FC in hexadecimal. I can’t remember exactly which function I saw this in but the game pretty much does this somewhere around the mouseover code iirc: objectid >> (0x14 & 0x3f)

Let’s try iterating this stuff then to see what all is contained in this array.

And the results are fine too. 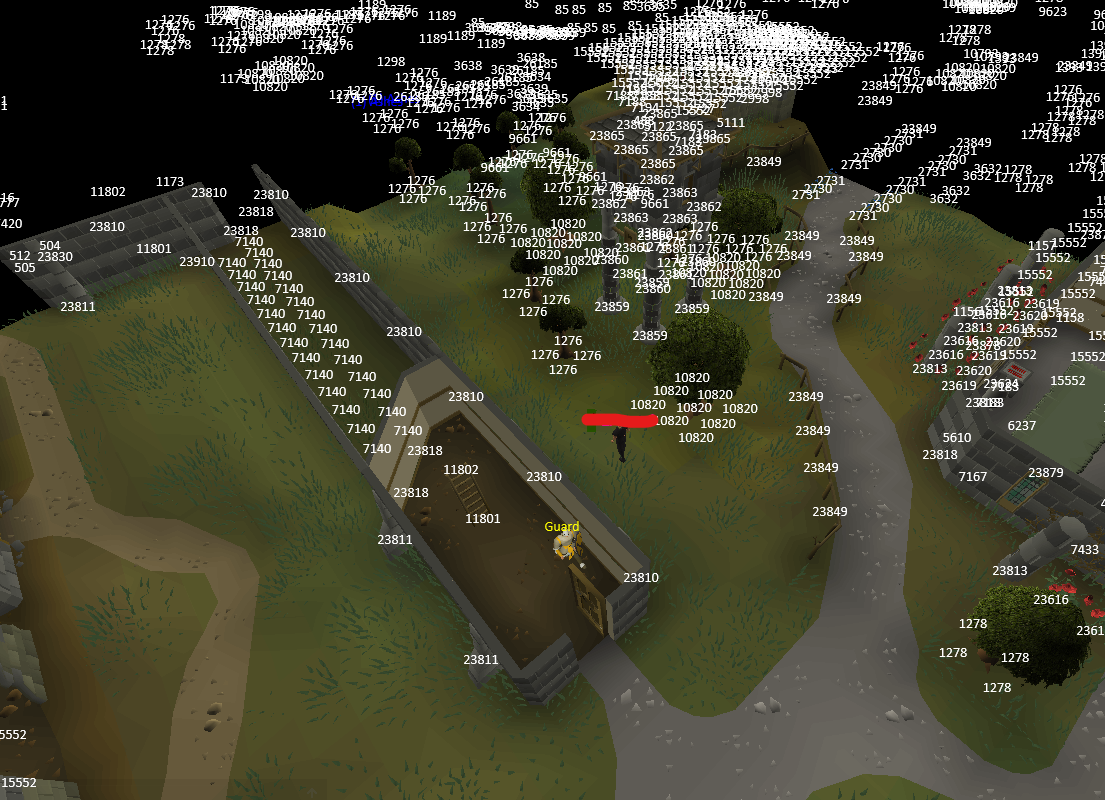 Overlaying all the objects for each tile

It’s not fast though, especially externally, so thats a puzzle for the reader. Sorry!

But you promised everything!

Yup. I did, at least where to find them.. Writing up how I discovered them or how they are structured would take another 500 words so I’ll leave it up to you at home to do for yourself! +0x88 contains a pointer to an array of ground item pointers (or close enough.), null if no items on the tile.

Walls, doors and bank booths etc. can be found at +0x58 with a structure similar but not exactly the same as what we found in +0xd0, though it’s a single pointer and not an array, once again null if no walls etc. on the tile.

There’s still a lot for me to still explore in these structures, but those are the most important parts to get started.

It was once again a struggle to keep it short. I might have to make a proper ReClass.NET tutorial so that I can refer to that when writing.

I figured out I actually have to iterate this stuff (as of writing this on 30.3.) yesterday so I’ve not done a deep dive on it yet. My previous method for getting static objects was too inconsistent externally due to map chunks getting overwritten sometimes, oh well, I had reversed ground items, dynamic objects and static objects separately instead of just iterating the render list from the beginning when it was sitting there under my nose facepalm.

I think my next blogpost will be on how do you find item and object names without cache parsing, though once again you don’t need to bother to do that as you can use cache data (see https://www.osrsbox.com for good resources). After that I’ll likely do one on scraping UI text and interfaces that contain items (e.g. inventory).

Feedback, complaints, whatever are easiest sent to @alert_insecure on twitter or alternatively email atte@reversing.games if you’re old school like that.

With the release of the Steam version of Old School RuneScape, the game client was ported from its old Java version to a native C++ version so I figured what’s a better time to start looking in to ...

Welcome to the second part of my OSRS reversing series. In the last part we found out how trivial finding players and NPCs is. In todays blogpost we have another challenge though, how do we get scr...

Welcome to the fourth part of my OSRS reversing series. I’ll be trying to dump a lot of “essential” stuff at a quick pace (for the amount of stuff there is to do) this blog. Finding Item, objec...